After reviewing these results, Fireweed CEO Brandon Macdonald stated “2021 was another globally challenging year but through diligent work by our talented team and strict health protocols, we had another very successful year at Macmillan Pass. The 2021 work was highlighted by new discoveries and excellent results especially at Boundary West. The 2021 drill program continued to grow Boundary and Boundary West Zones. We continued to intersect wide high-grade zones over a large area and in multiple rock formations with a variety of mineralization types – massive sulphides, veins, stockworks, and another new zone of laminated, stratiform mineralization similar in style to our large Tom and Jason deposits. All zones remain open for extension building on what is already one of the largest undeveloped zinc resources in the world at just Tom and Jason.

I want to personally thank our talented and hard-working team for all their great work in 2021, our First Nations partners for their support, guidance and valuable contributions, and our shareholders for their trust and support during a challenging year. We all look forward to another year of major accomplishments in the field in 2022 which will lead to an updated mineral resource to include Boundary zones and an updated PEA economic study next year.”

Boundary Zone is at least 350 m along strike, has been drilled at least 300 m down-dip, is approximately 185 to 250 m true thickness, and occurs from surface beneath a thin blanket of till, approximately 5-10 m thick. Intersections that cut through the complete thickness of Boundary Zone are over 200 metres in length and range in grade from 2.35% to 4.51% zinc and contain many shorter high-grade intervals (Cross Section A-A’). In 2021, step-out hole NB21-005 successfully extended zinc mineralization to depth and also intersected a 2 m interval of 1.54% copper and 5.42% zinc – the first occurrence of significant grade copper mineralization at Boundary Zone. Zinc mineralization at Boundary Zone typically takes the form of sphalerite or sphalerite-pyrite veins, vein-breccias, or replacements within coarse clastic rocks. The exploration target at Boundary Zone remains open in all directions.

Boundary West is over 400 m along strike, extends from 20 m below surface to over 300 m down-dip. Boundary West contains multiple stratiform layers that form discrete zones of zinc mineralization, including a laminated zone, a massive sulphide zone, a volcanic-hosted zone, and a “Howard’s Pass”-style zone. In addition to the stratiform zones there is a stockwork of sphalerite-pyrite veins. The high-grade laminated zone was discovered in 2021, with an intersection in NB21-002 returning 23.77% zinc, 3.44% lead, 75.7 g/t silver over 10.42 m and is similar in texture and mineralogy to the Tom and Jason deposits. The massive sulphide zone comprises massive sphalerite-pyrite, was intersected multiple times in the 2021 drill program and ranges in grade on section B-B’ from approximately 4.8% to 6.5% zinc near surface to 8.2% to 10.4% zinc at depth, with a true width of approximately 22 to 27 metres. The volcanic-hosted zone was intersected in 2021 hole NB21-008 grading 5.4% zinc over 73.4 m and shows rapid lateral thickness changes (Cross Section C-C’, Table 2). The Howard’s Pass style mineralization was intersected in 2020 hole NB20-009 but was not targeted in the 2021 drill program (for more details see Fireweed News Release dated 25th February 2021). Boundary West is open in all directions, with a general trend of increasing grade with depth and other geological indications of getting closer to the feeder with depth, where higher grades may be anticipated.

Tom East is one of the highest grade zones discovered on the property to date with current Mineral Resources of 0.81 Mt at 8.74% Zinc, 8.62% Lead, and 110.0 g/t Silver Indicated in addition to 1.68 Mt at 9.86% Zinc, 12.86% Lead and 170.0 g/t Silver Inferred (see Fireweed news release dated 10th January 2018, and reports filed on www.sedar.com for details). Results from an infill hole drilled in 2021 are in Table 4 and a second hole tested the limits of the zone (see Figure 5 & Table 5). These infill results provide information that will inform geological modelling for a new resource calculation and guide further exploration. Tom East is open for expansion at depth.

Field work in 2021 consisted of geophysical surveying, geological mapping, and geochemical sampling mainly at and west of the Boundary area, and successfully identified several additional targets for drilling (see Figure 1). A total of 91 line kilometres of ground gravity surveys and 1,305 line kilometres of airborne magnetic-electromagnetic (VTEM) were carried out in the Boundary area and beyond. A cutting edge muon downhole geophysics survey was attempted but crews were unable to deploy the muon detectors down the holes. Currently, interpretation of results from the 2021 mapping, geochemistry and geophysics work are being carried out toward planning of the 2022 work program.

On December 8, 2021, Fireweed announced closing of a C$5.18 million financing toward an active 2022 exploration program. The financing was completed well before the next field season to allow the Company to secure drillers and contractors who are expected to be in short supply again next season. Final plans for the 2022 exploration program will be announced when the interpretation of 2021 field work is completed and budgets are approved. The main goal of the 2022 program will be to complete sufficient work to update the NI43-101 mineral resource to include Boundary zones and other results collected since 2018, and then update the PEA economic study next year.

The diamond drill core logging and sampling program was carried out under a rigorous quality assurance / quality control program using industry best practices. Drill intersections in this release are all HQ3 (split tube) size core (61.1mm / 2.4-inch diameter) with recoveries typically above 85% unless otherwise noted in the tables of results. After drilling, core was logged for geology, structure, and geotechnical characteristics, then marked for sampling and photographed on site. The cores for analyses were marked for sampling based on geological intervals with individual samples 1.5 m or less in length. Drill core was cut lengthwise in half with a core saw; half-core was sent for assays reported in this news release, and the other half is stored on site for reference. Bulk density was determined on site for the entire length of each sample assayed by measurement of mass in air and mass in water. Sample duplicate bulk density determinations and in-house bulk density standard determinations were each made at a rate of 5%. Since 2017, four in-house bulk density standards (mineralized drill core from the Tom deposit that span a range of densities) have been used and show an acceptable long-term precision. Certified standard masses are used to calibrate the scale balance used for bulk density determinations.

A total of 5% assay standards or blanks and 5% core duplicates are included in the sample stream as a quality control measure and are reviewed after analyses are received. Standards and blanks in 2021 drill results have been approved as acceptable. Duplicate data add to the long-term estimates of precision for assay data on the project and precision for drill results reported is deemed to be within acceptable levels. Samples were sent to the Bureau Veritas preparation laboratory in Whitehorse, Yukon, where the samples were crushed and a 500 g split was sent to the Bureau Veritas laboratory in Vancouver, B.C to be pulverized to 85% passing 200 mesh size pulps. Clean crush material was passed through the crusher and clean silica was pulverized between each sample. The pulps were analyzed by 1:1:1 Aqua Regia digestion followed by Inductively Coupled Plasma Mass Spectrometry (ICP-ES/ICP-MS) multi-element analyses (BV Code AQ270). All samples were also analyzed for multiple elements by lithium borate fusion and X-ray fluorescence analysis (XRF) finish (BV Code LF725). Over-limit Pb (>25.0%) and Zn (>24.0%) were analyzed by lithium borate fusion with XRF finish (BV Code LF726). Silver is reported in this news release by method AQ270, and zinc and lead are reported by LF725 or LF726. Bureau Veritas (Vancouver) is an independent, international ISO/IEC 17025:2005 accredited laboratory.

Results in this news release are length and bulk-density weighted averages as would be used in a Mineral Resource estimate. Readers are cautioned that in Fireweed news releases prior to 2020, only length weighted assay averages were reported which may result in slightly lower (under-reported) average values. Length and bulk-density weighted averages have been reported as these most accurately represent the average metal-content of the intersections.

Technical information in this news release has been approved by Jack Milton, P.Geo., Ph.D., Chief Geologist and a ‘Qualified Person’ as defined under Canadian National Instrument 43-101.

Fireweed is pleased to announce that it has exercised its option on the Oro Property covering the western extension of the Fertile Corridor and exploration targets west of Boundary Zone (see Fireweed news release dated 23rd November 2020 for details). With this exercise, Fireweed is now 100% owner of all claims comprising the 940 km2 Macmillan Pass Project.

Fireweed Zinc is a public mineral exploration company managed by a highly experienced team of mining industry professionals. The Company is advancing its 100% owned, district-scale 940 km2 Macmillan Pass Project in Yukon, Canada, which is host to the Tom and Jason zinc-lead-silver deposits with current Mineral Resources and a PEA economic study (see Fireweed news releases dated 10th January 2018, and 23rd May 2018, respectively, and reports filed on www.sedar.com for details) as well as the Boundary Zone, Boundary Zone West, Tom North Zone and End Zone which have significant zinc-lead-silver mineralization drilled but not yet classified as mineral resources. The project also includes large blocks of adjacent claims (MAC, MC, MP, Jerry, BR, NS, Oro, Sol, Ben, and Stump) which cover exploration targets in the district where previous and recent work identified zinc, lead and silver prospects, and geophysical and geochemical anomalies in prospective host geology.

In Canada, Fireweed (TSXV: FWZ) trades on the TSX Venture Exchange. In the USA, Fireweed (OTCQB: FWEDF) trades on the OTCQB Venture Market for early stage and developing U.S. and international companies. Companies are current in their reporting and undergo an annual verification and management certification process. Investors can find Real-Time quotes and market information for the Company on www.otcmarkets.com. In Europe, Fireweed (FSE: 20F) trades on the Frankfurt Stock Exchange.

Additional information about Fireweed Zinc and its Macmillan Pass Project including maps and drill sections can be found on the Company’s website at www.FireweedZinc.com and at www.sedar.com.

This news release may contain “forward-looking” statements and information relating to the Company and the Macmillan Pass Project that are based on the beliefs of Company management, as well as assumptions made by and information currently available to Company management. Such statements reflect the current risks, uncertainties and assumptions related to certain factors including but not limited to, without limitations, exploration and development risks, expenditure and financing requirements, general economic conditions, changes in financial markets, the ability to properly and efficiently staff the Company’s operations, the sufficiency of working capital and funding for continued operations, title matters, First Nations relations, operating hazards, political and economic factors, competitive factors, metal prices, relationships with vendors and strategic partners, governmental regulations and oversight, permitting, seasonality and weather, technological change, industry practices, and one-time events. Additional risks are set out in the Company’s prospectus dated May 9, 2017, and filed under the Company’s profile on SEDAR at www.sedar.com. Should any one or more risks or uncertainties materialize or change, or should any underlying assumptions prove incorrect, actual results and forward-looking statements may vary materially from those described herein. The Company does not undertake to update forward‐looking statements or forward‐looking information, except as required by law.
Footnotes: 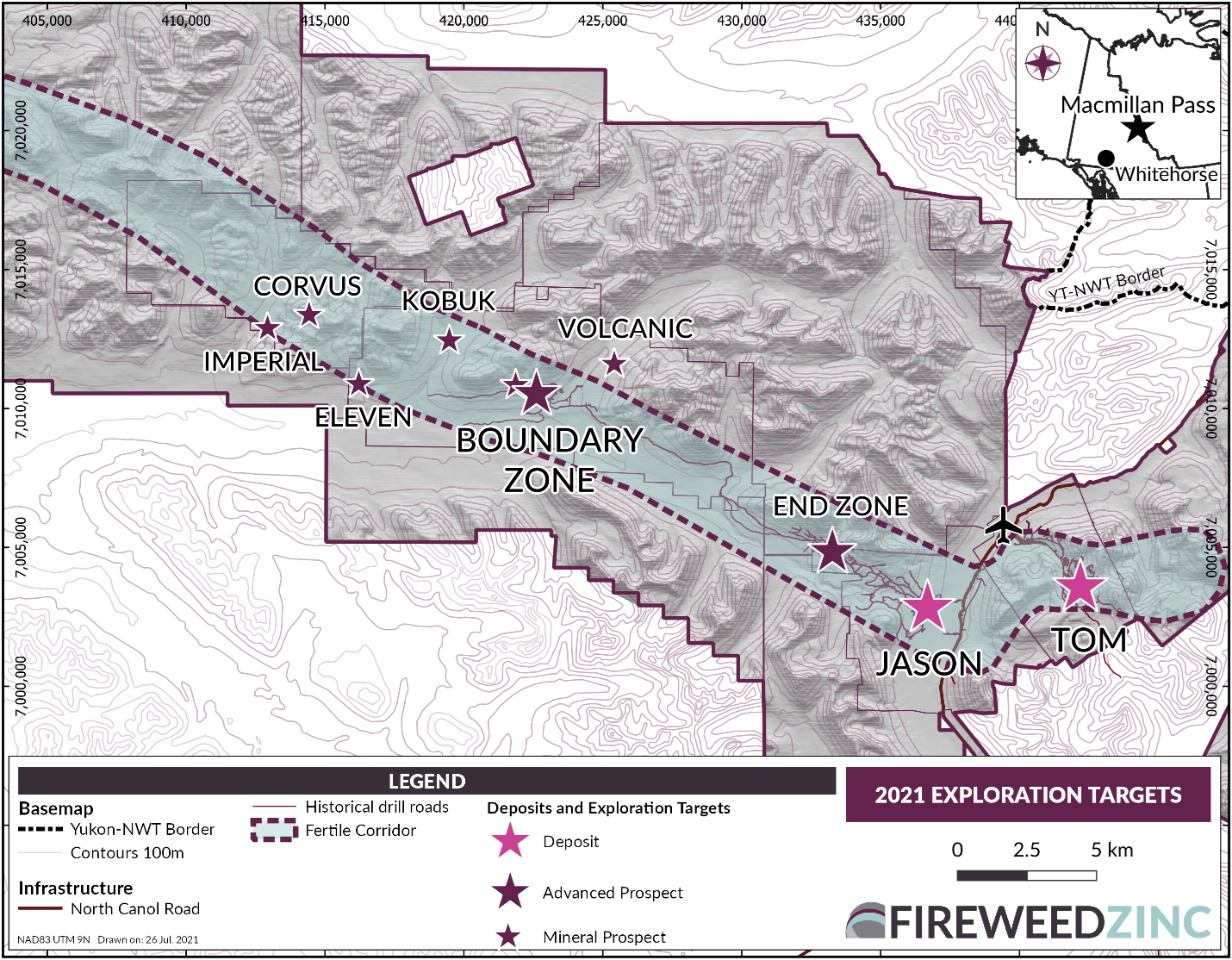 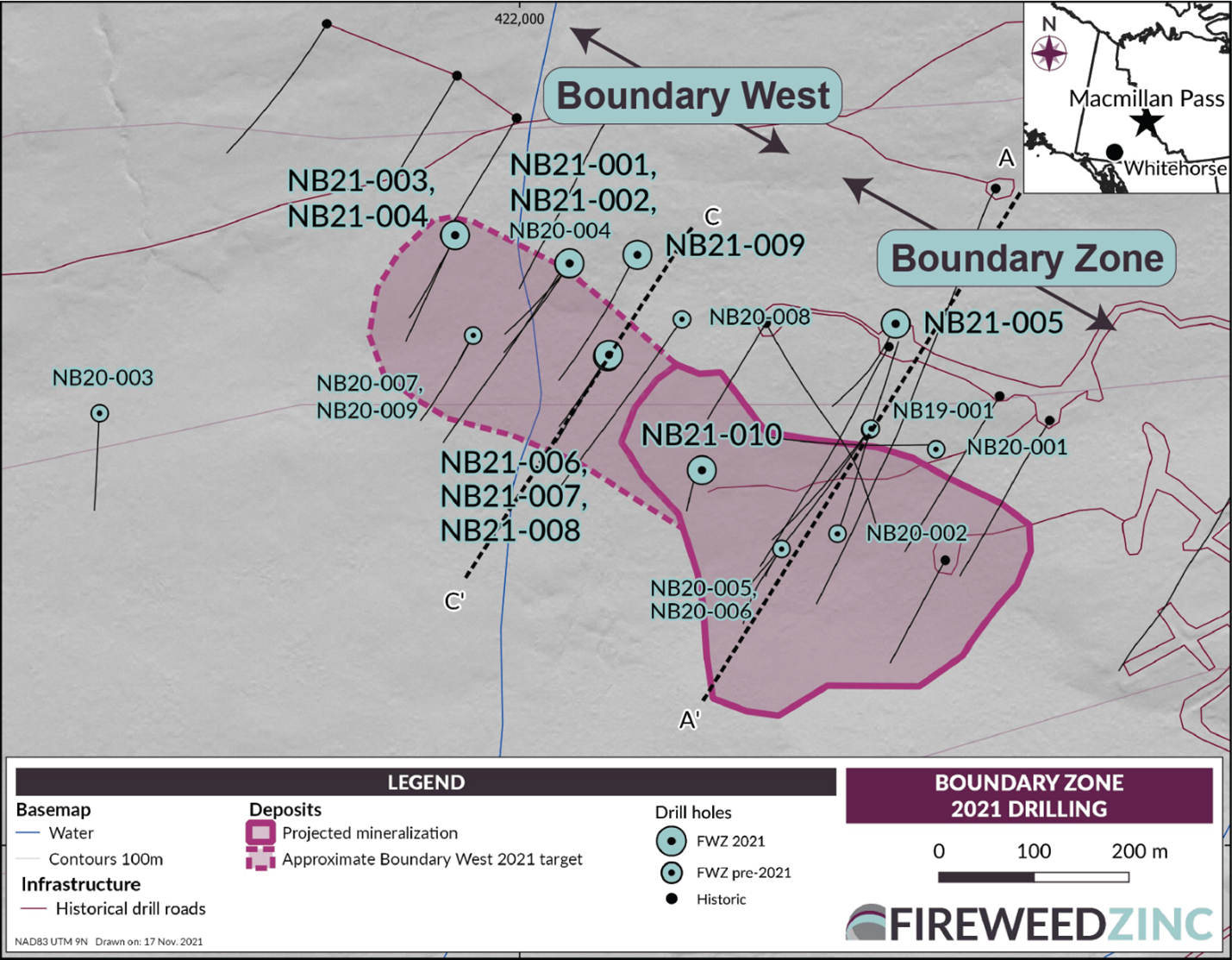 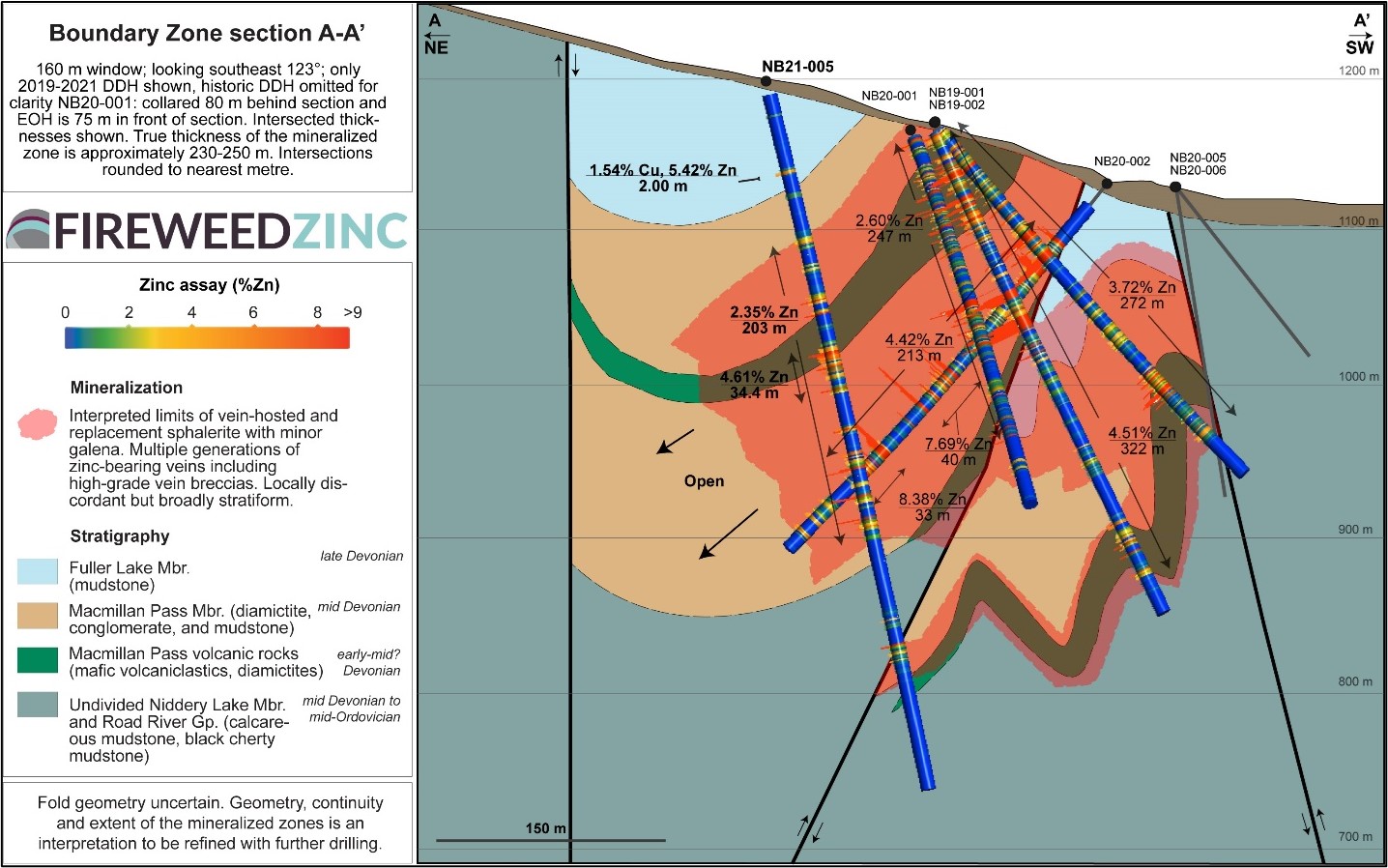 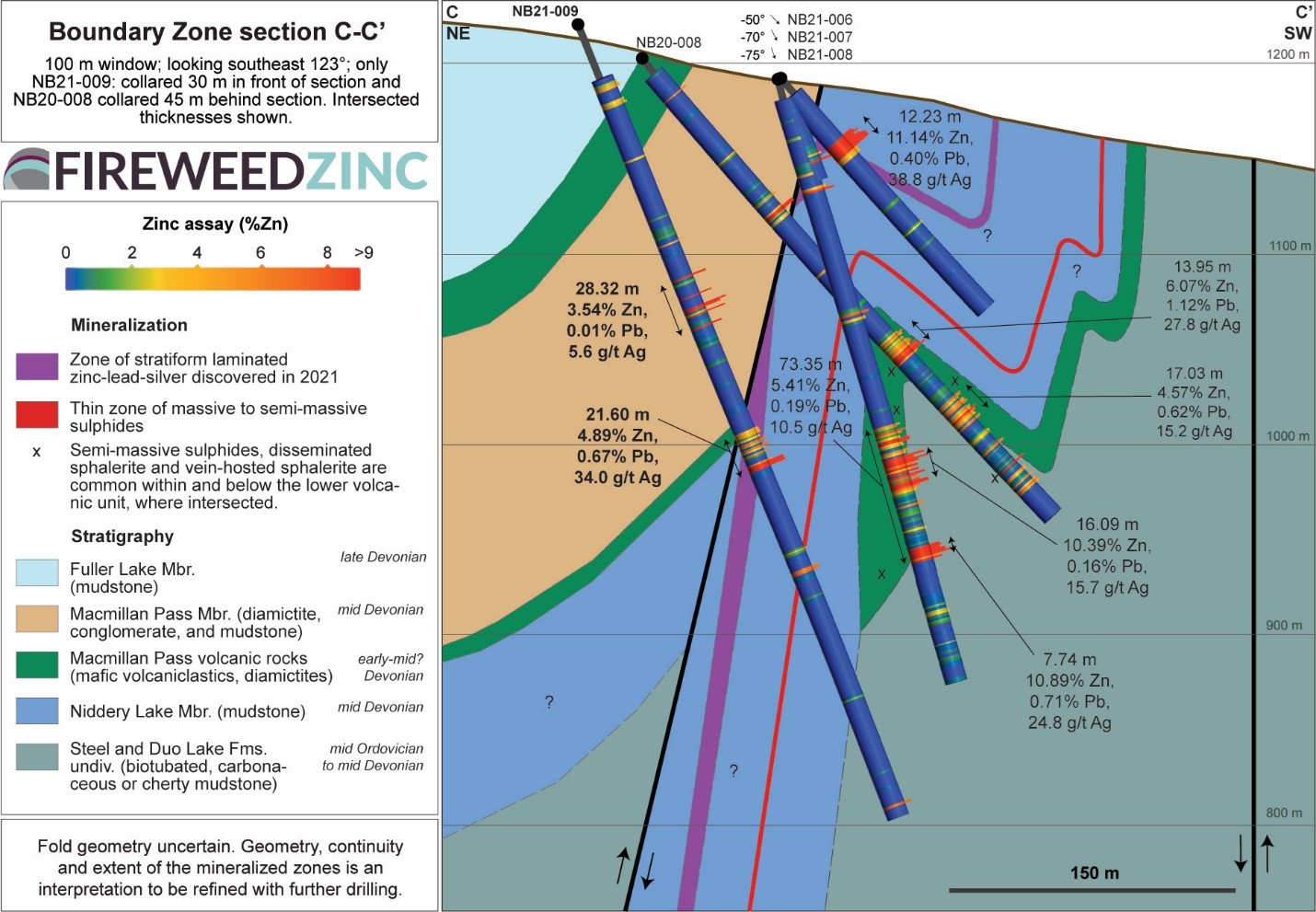 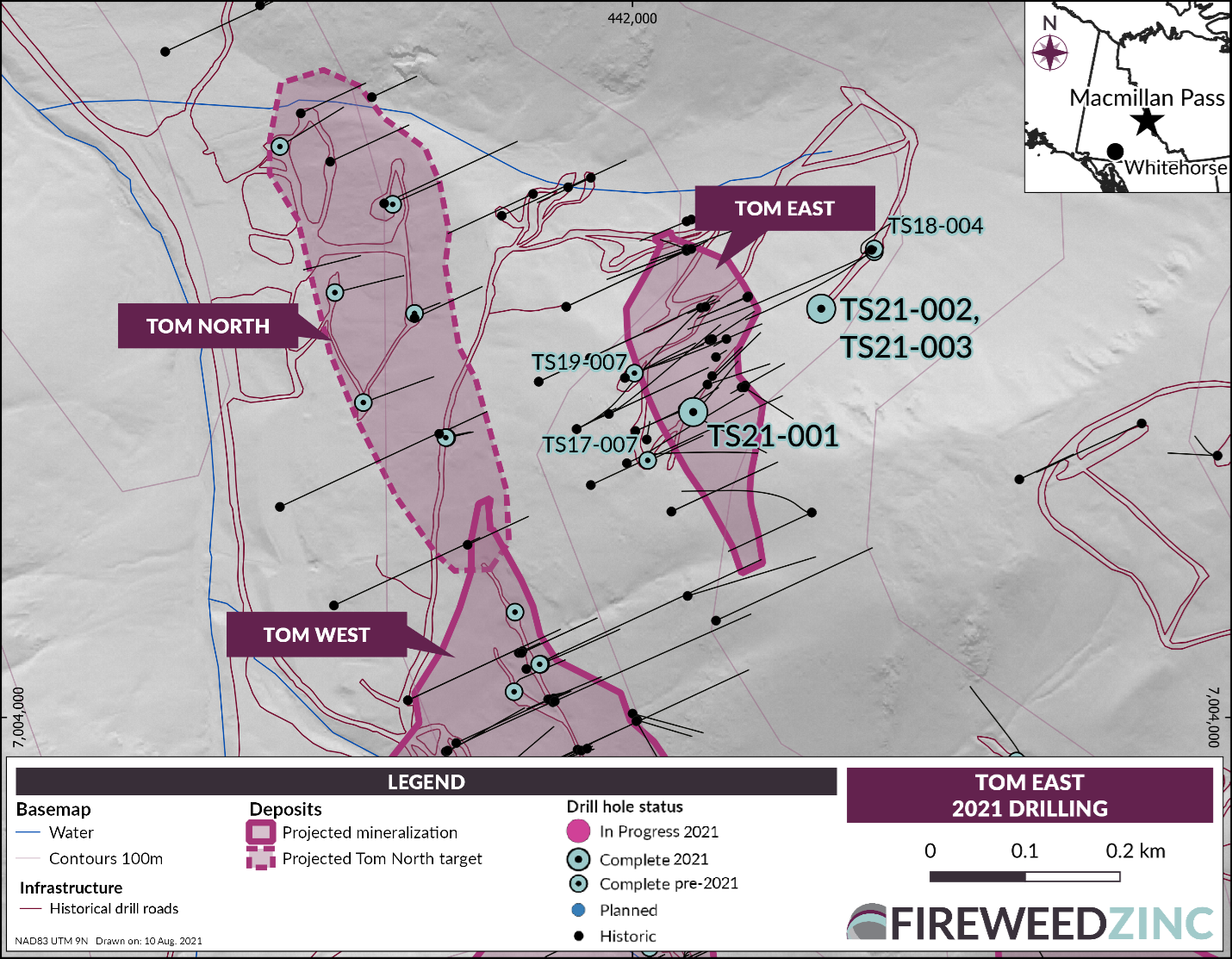